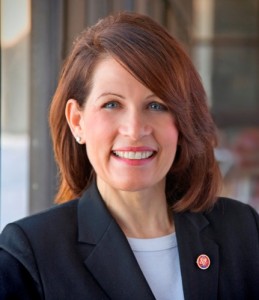 Congresswoman Michele Bachmann was on Hannity’s show last night to talk about the upcoming 2012 race and when she’ll make her decision.

From the interviews today at Reliant Stadium:

John Calipari talked to the media today at Reliant Stadium.

Washington (CNN) – Former Defense Secretary Donald Rumsfeld gave his view of the 2012 presidential campaign field by saying, “I would recommend letting these people run around the track for a while, see how they do.”

In an interview that aired Wednesday on CNN’s “John King, USA” Rumsfeld wouldn’t divulge who out of the potential candidates would garner his support, but he mused about the pivotal moment in time for a presidential election.

“Oh I think its kind of an unusual opportunity we have. We have … no sitting president in our party, no sitting vice president, and no logical candidate who’d run before, so its a fresh, clean slate,” Rumsfeld said.

During the interview, Rumsfeld touched on other issues, including the situation in Libya. He also took a trip down memory lane, reminiscing about his years as a congressman when John F. Kennedy and Lyndon Johnson manned the White House. Rumsfeld was also White House chief of staff during part of the Ford administration and filled various roles for the Nixon administration.

Rumsfeld – who resigned from the Pentagon post the day after the 2006 midterm elections, when the Republican party lost control of Congress – published a memoir recently detailing his insights about the Bush administration, 9/11, and the wars in Afghanistan and Iraq.

Rumsfeld praised the Tea Party for “bringing more people into politics,” a sentiment he has vocalized before.

“I think it’s a healthy thing to have the Tea Party, myself,” Rumsfeld said, “I think that if you believe in democracy, having more people engaged and interested is a healthy thing.”

The games the Democrats are playing with the budget is not fooling anyone. As Rubio said, the Democrats’ $ 6 billion in cuts for one year is not solving the trillions in debt we’re in.

Kentucky held a media opp this afternoon with players Brandon Knight, Josh Harrellson and Deandre Liggins. Brandon was first up. Here’s the first four-plus minutes, in which Knight talked about the team’s development, the team meeting, the affect of Enes Kanter on practice, and other subjects.

Washington (CNN) – Bipartisan talks to end the budget crisis, which stalled last week, appeared to grind to a near standstill Monday, raising concerns on both sides of the political aisle that large parts of the government could shut down when the current spending measure expires at the end of next week.

“Republicans refuse to negotiate on a final number,” Senate Democratic Leader Harry Reid said on the Senate floor. “The infighting between the tea party and the rest of the Republican Party – including the Republican leadership in Congress – is keeping our negotiating partner from the negotiating table.” House Republican Leader Eric Cantor denied the talks might collapse because of disagreements between the GOP leadership and the conservative wing of their caucus. Instead, he blamed Reid for “abandoning his responsibility to offer a credible plan to cut spending and fund the government for the rest of the year.”

Democrats Monday said they were prepared to split the difference with Republicans who want a total of $ 61 billion cut from current spending levels. Two senior Democratic aides said their party is prepared to offer $ 30 billion in spending cuts. $ 10 billion in cuts have already been adopted as part of temporary spending bills which are keeping the government running. And Democrats said they were ready to propose an additional $ 20 billion.

But a senior House GOP source said Republican leaders don’t believe they can convince rank-and-file conservatives to accept less than $ 40 billion in cuts.

Another critical factor in negotiations, beyond how many dollars will be cut, is major policy differences that sharply divide the parties – specifically the House GOP push to eliminate funding for the health care law and federal money for Planned Parenthood because of its abortion coverage. Democratic and Republican sources say GOP negotiators are demanding that those provisions stay in. House GOP sources say they may be able to sell less spending cuts to their caucus if they get some policy objectives, but Democratic sources call eliminating funding for Planned Parenthood and the Democrats’ health care law “non-starters.”

Despite the public acrimony, aides said there was communication between the two sides Monday and they expect talks to continue this week.

The standoff over funding for 2011 portends an even tougher fight ahead for the 2012 budget.

House Republicans are expected to unveil their proposal next week. They have vowed to include politically daring suggestions to rein in expensive entitlement programs – such as Medicare, Medicaid and Social Security.

To lay down a marker against cuts to Social Security, a group of liberal Democratic senators led by Reid, held a rally on Capitol Hill. They insisted the program – which pays benefits to older Americans, the disabled, and others – should not be included in talks to reform entitlements.

Several hundred activists cheered as the senators vowed to fight any efforts to cut benefits and raise the retirement age for beneficiaries.

At the Times, when it comes to affixing blame for stymied peace negotiations, Israel predictably ends up as the guilty party. American Thinker Blog 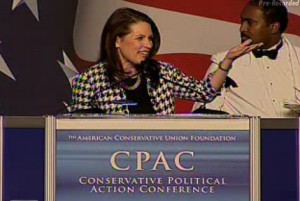 Rep. Michele Bachmann was the hit of the  Iowa Conservative Principles Conference.

She talked up the economy and her vast knowledge on the tax code, talked China, and promoted the fair tax.

Well, since John has discovered the joys of Xtranormal, I can’t help but offer one from my household, in this case one my skeptical spouse did a while ago on campaign finance reform, which is timely since there is a case before the Supreme Court on Monday about Arizona’s public financing law, which the New York Times today praises as a “calibrated” approach to regulating political speech, good enough reason for the Supreme Court to strike it down.

Well, since John has discovered the joys of Xtranormal, I can’t help but offer one from my household, in this case one my skeptical spouse did a while ago on campaign finance reform, which is timely since there is a case before the Supreme Court on Monday about Arizona’s public financing law, which the New York Times today praises as a “calibrated” approach to regulating political speech, good enough reason for the Supreme Court to strike it down.

The closed-door state union negotiations have been wrapped in a shroud of secrecy as Gov. Dannel P. Malloy is seeking $ 2 billion in savings from the state employee unions that have a benefit contract that does not expire until 2017.

But an internal questionnaire from one union provides a glimpse of the types of wage, benefit, and retirement issues that are being discussed behind closed doors.

The questionnaire asks employees from the Administrative and Residual Union to cite which concession would be so objectionable that it would prompt them to vote against an overall union concession agreement. The list of 11 possibilities includes similar points that have been mentioned publicly by Malloy and are likely to be crucial to the talks.

The first question asks, “Are you willing to make some concessions to avoid layoffs?”

The one-page memo, obtained by Capitol Watch, also asks if the employees would vote against a one-year wage freeze or a two-year wage freeze. They are also asked if they would oppose allowing the state to switch to a 401k retirement program for all new employees who are hired after July 1 – instead of the lucrative pension system that the current employees receive.

*”Raising the retirement age to 65 for employees hired after June 30.”

*Creating a new, Tier III pension plan for new employees with a defined benefit, such as the current system.

*Switching to the same type of health benefits plan as federal employees, which Malloy says would save more than $ 100 million over two years.

Michael Winkler, the first vice president of Newington-based A & R, confirmed that the union has been surveying its members at a series of meetings around the state. The surveys are not always the same, but the version obtained by Capitol Watch is the latest version.

“We want to know what our members can and cannot accept,” said Winkler, the former union president who has been an official at the union for the past 12 years.

Concerning the 11 possibilities on the questionnaire, Winkler said that the union needs to know “which ones are the least palatable” to the membership.

On Feb. 22 I broke the news that during production of an HBO Real Sports special on the business and ethics of high profile college athletics, former Auburn football player Stanley McClover had told an HBO interviewer that a former Auburn assistant coach had provided him extra benefits that would be considered outside of NCAA rules. 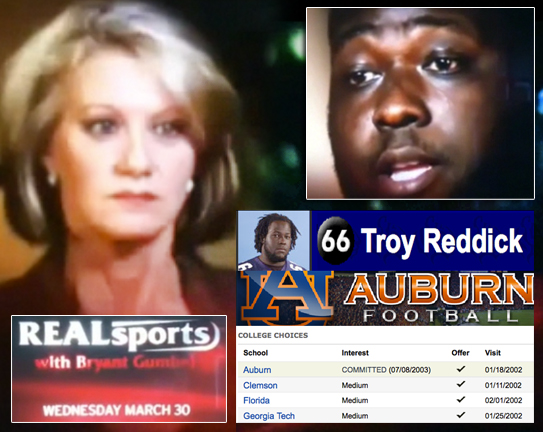 McClover’s claims about the arrangement were subsequently debunked by his high school coach and former Auburn teammates.

We’ve since learned that the Real Sports episode on college athletics, which debuts on HBO on March 30, will be broken into three parts. From an HBO press release:

The “two long-form segments” include:

The Money Trail: Every year, thousands of talented young student-athletes sign letters of intent and obtain full-ride athletic scholarships (tuition and board) from the biggest, wealthiest programs in America, effectively giving up all rights to revenue generated by their participation, including TV rights fees, merchandising and ticket sales. But with a dramatic increase in revenue from top programs and athletes’ growing awareness of their contribution, many are starting to ask if there should be financial compensation. REAL SPORTS correspondent Bernard Goldberg examines the notion of student-athletes remaining untainted amateurs while generating pro-type revenue for their schools. Are they getting a fair shake?

Pay to Play: Should athletes at Division I programs be financially compensated? And would that curb the headline-grabbing stories of inappropriate payments and benefits? More and more standout athletes in top programs are seemingly putting their education on the back burner to focus on what’s really important ? the money. Those destined for the NBA and NFL face the moral dilemma of dealing with “advisors” and “street agents” who can deliver the funds and material items they desire while in school in exchange for a promise of future reciprocation when they reach the pros. REAL SPORTS correspondent Andrea Kremer delves into the controversial and complex subject of premium college-bound athletes receiving benefits that are prohibited by the NCAA.

Immediately following the March 30 presentation of REAL SPORTS WITH BRYANT GUMBEL, at 11:00 p.m. (ET), viewers can log on to hbo.com/realsports for an exclusive “overtime” webcast segment, in which the roundtable panel will continue the discussion and answer questions from viewers.

HBO is currently airing a promotional trailer for the scheduled broadcast which does not include McClover but does feature another former Auburn player and an ex-Alabama football player.

Former Alabama wide receiver Tyrone Prothro is shown in the promotional video being interviewed by Goldberg.

In the HBO preview clip, Prothro and Goldberg have this exchange: END_OF_DOCUMENT_TOKEN_TO_BE_REPLACED

Doc Rivers talks about the Celtics loss and what’s wrong with Rondo – WEEI.com