The turkey as our national symbol?

Yes, Benjamin Franklin, at least in a letter to his daughter, preferred the turkey to the bald eagle as our national symbol.

What inspired that thought was the Society of the Cincinnati’s eagle, which looked a bit like a turkey.

Courtesy of the Great Seal.com, here is an excerpt of that Franklin letter:

“For my own part I wish the Bald Eagle had not been chosen the Representative of our Country. He is a Bird of bad moral Character. He does not get his Living honestly. You may have seen him perched on some dead Tree near the River, where, too lazy to fish for himself, he watches the Labour of the Fishing Hawk; and when that diligent Bird has at length taken a Fish, and is bearing it to his Nest for the Support of his Mate and young Ones, the Bald Eagle pursues him and takes it from him.

“With all this Injustice, he is never in good Case but like those among Men who live by Sharping & Robbing he is generally poor and often very lousy. Besides he is a rank Coward: The little King Bird not bigger than a Sparrow attacks him boldly and drives him out of the District. He is therefore by no means a proper Emblem for the brave and honest Cincinnati of America who have driven all the King birds from our Country . . .

“I am on this account not displeased that the Figure is not known as a Bald Eagle, but looks more like a Turkey. For the Truth the Turkey is in Comparison a much more respectable Bird, and withal a true original Native of America . . . He is besides, though a little vain & silly, a Bird of Courage, and would not hesitate to attack a Grenadier of the British Guards who should presume to invade his Farm Yard with a red Coat on.”

Wild turkeys are more graceful and less comical than their inbred cousins who will end up on your dinner plate on Thanksgiving Day, so don’t automatically dismiss Franklin’s idea.

I encountered these birds in July at Zion National Park.

In 1775, Dr. Franklin suggested that contemporary Tea Party favorite, the rattlesnake, for our national symbol. 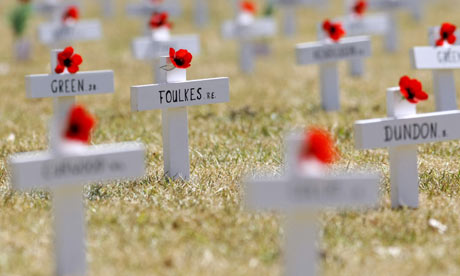 Armistice Day is a very big deal in Britain, as you might expect. The UK suffered 658,700 dead in WWI and an additional 388,000 a mere twenty years later in WWII.

A revered national symbol of Armistice Day is the poppy, which is displayed and worn by Brits throughout the country and derives from the famous poem ‘In Flanders Fields.’

A contingent of British Muslims had a special remembrance planned..protests where a large model of an Armistice Day poppy was burned in effigy,complete with signs saying that Britain’s dead troops were burning in hell: 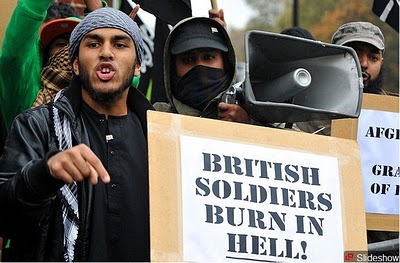 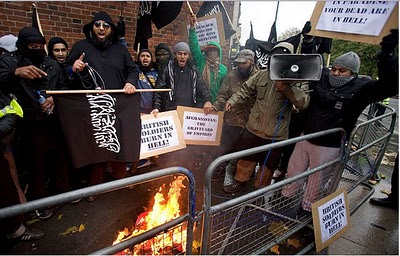 And yes, a lot of them are probably on the dole and getting welfare benefits.

How’s that multiculturalism working out for you, cousins? 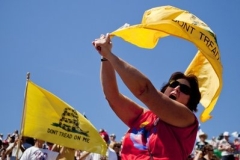 Texas law says that, while in the polling place, you can’t advocate for or against “any candidate, measure, or political party.” Granted, anyone with a “Don’t tread on me” button is probably a safe bet to be voting GOP this year — the left doesn’t remember colonial history, after all — but one can’t make […]

General Manager of Al-Arabiya TV on Ground Zero mosque: “It will be turned into an arena for promoters of hatred, and a symbol of those who committed the crime”

[…] I cannot imagine that Muslims want a mosque on this particular site, because it will be turned into an arena for promoters of hatred, and a symbol of those who committed the crime. At the same time, there are no practicing Muslims in the district who need a place of worship, because it is indeed a commercial district. Is there a side that is committed to this mosque? The fact is that in the news reports there are names linked to this project that costs 100 million dollars!

The sides enthusiastic for building the mosque might be building companies, architect houses, or politicized groups that want suitable investments?! I do not know whether the building applicant wants a mosque whose aim is reconciliation, or he is an investor who wants quick profits. This is because the idea of the mosque specifically next to the destruction is not at all a clever deed. The last thing Muslims want today is to build just a religious center out of defiance to the others, or a symbolic mosque that people visit as a museum next to a cemetery….