Salmon tells Arizona political publication “Yellow Sheet Report” (subscriber) that he is seriously considering launching a bid for the seat being vacated by retiring Sen. Jon Kyl (R) and has begun making calls to gauge support.

Salmon served in Congress in Arizona’s first congressional district during the mid-nineties. He stepped down after a third term and Flake was elected to his seat in 2000. Salmon ran for governor in 2002, losing a close race to now Department of Homeland Security Secretary Janet Napolitano. He later served as chair of the state Republican party.

Salmon expects to finalize a decision in the next few months.

What’s the deal with salmon?

Like many examples of governmental dysfunction, the way salmon are regulated makes more sense when you look at it closely than when you simplify it for a laugh line. The reason fishing for salmon in freshwater and fishing for salmon in saltwater get regulated by different agencies is that it’s the water, not the salmon, being regulated. Brian Palmer explains:

The U.S. Fish and Wildlife Service, part of the Department of the Interior, has jurisdiction over fishermen working in inland bodies of water, while the Commerce Department’s National Oceanographic and Atmospheric Administration regulates marine fishing within 200 miles of the U.S. coastline. (Fishing beyond that distance is loosely governed by various international bodies and agreements.) There’s nothing crazy about this regulatory divide: Large commercial operations dominate marine fisheries, whereas freshwater fishing is largely the province of sportsmen. Monitoring stocks of ocean fish is also more expensive and complex than keeping track of the population in a river.

From a commercial fisherman’s perspective, this governance structure isn’t nearly as vertiginous as the president implied. Most fish fall neatly within the jurisdiction of one of the two agencies. Salmon are among a handful of fish species, along with shad and eel, that cross the regulatory boundary in the course of their regular migrations, but commercial operators hunt salmon exclusively in the ocean.

Palmer goes on to note that there’s a long-running effort to create a National Oceans Agency that would coordinate oceans-related policy across all the different departments. More on that here.

That Was One Hell Of A Speech You Gave On Salmon Last Night, Mr. Obama…Wait, What?

Apparently, according to NPR, what people got out of the 2011 State Of The Union Prom was….salmon

Right after President Barack Obama finished his State of the Union address, we asked our listeners to describe his speech in three words. We received responses from more than 4,000 of you. We’ve run them through a word cloud generator and this is what all of you said: 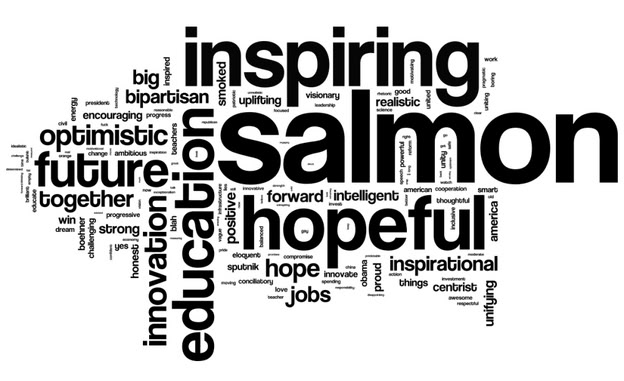 Independents, Republicans, and Democrats all named “salmon” as the number one thing. I wish this was a joke or a spoof site, alas, it is NPR and seems serious.

It was all about the salmon.

Keller tells the inside story of how the Times dealt with Julian Assange.

Messina moves from the White House to the campaign.

Should Pawlenty try to stand out or quietly build in Iowa and New Hampshire?

Palin’s PAC is now one of the largest donors in the country.

Santorum says the slow start to 2012 helps him.

Centrist Republicans actually see a growth in their numbers.

School vouchers are back on the table in Congress.

And meet the Meet the Press butler — who recently passed away.

Smoked Salmon: Your Government at Work

So I could find nothing in the U.S. Code on smoked salmon (search here) but I did find this from the USDA:

Popular fish like salmon, catfish, and tilapia are coming under the close scrutiny of Agricultural Research Service food-safety scientists Andy Hwang and Kathleen Rajkowski. They’re discovering more about how to prevent foodborne pathogens from contaminating these and other delicious, good-for-you seafood. Both scientists are based at the ARS Eastern Regional Research Center in Wyndmoor, Pennsylvania.

Should Genetically Modified Salmon Be Labeled?

The Food and Drug Administration is considering whether to approve genetically modified salmon for human consumption.  Aquabounty Technologies has submitted its “AquAdvantage” salmon, an Atlantic salmon genetically engineered to mature faster than wild salmon, for FDA approval.  Thus far, things look good for Aquabounty, as the FDA’s staff review concluded that AquAdvantage salmon are as safe to eat as other Atlantic salmon.  Further, the staff found “no biologically relevant difference” between the fish.

If the FDA approves AquAdvantage, it is unlikely that the FDA will require that AquAdvantage be labeled as genetically modified.  Indeed, the FDA may lack authority to require such a label.  As the Washington Post reports, if the FDA concludes that AquAdvantage salmon are not materially different than other salmon, there is no basis to mandate disclosure, as failure to label the fish does not mislead the consumer.  Failure to disclose how a product is made — in this case, that an eel gene was inserted in the salmon to make it grow faster — is not misleading to consumers.  Under existing law, so long as the genetically engineered salmon is not materially different than other salmon, the fact that it was genetically engineered is no more relevant than what it was fed, the size of its pen (assuming farm-raised salmon), or how it was killed.  Producers are free to disclose such process characteristics, but the FDA will not mandate it.

Would the FDA’s failure to mandate the labeling of AquAdvantage salmon be a problem?  I think not.  It is one thing to require producers to label their products so that consumers are aware of potentially harmful characteristics.  It is quite another to force a producer to label a product to disclose a non-material fact about the product that some consumers may dislike, such as how it was produced.  The former is disclosure for consumer protection; the latter approaches forced stigmatization.  If, as the FDA apparently believes, the genetically engineered salmon is just as safe, healthful, etc. as other salmon, what basis is there for requiring a label?  If the government mandates a label, it is sending the message that a particular product characteristic is particularly important and should matter to consumers more than others.  It’s a non-so-subtle suggestion that something may be wrong.  Indeed, why else would there be a label?

Mandatory product labels typically provide consumers with information necessary for them to protect themselves from otherwise unknown product characteristics (as well as to identify and contact the producer).  Forcing candy makers to disclose the presence of peanuts protects those with allergies.  Nutritional content labels protect those with particular dietary needs.  Product safety labels can protect those who might be unaware of the danger a specific product may pose, and so on.  In such cases, the failure to label can leave consumers exposed to risks about which they were unaware.  In this case, however, the FDA has concluded there is no such risk, so this traditional labeling rationale is absent.

If consumers really care whether or not their salmon was genetically engineered — and I suspect some do — competing salmon producers have ample incentive to label their products as “natural” or “non-genetically engineered.”  Sellers of wild, non-farm-raised salmon are not shy in promoting this fact about their product.  Organic labeling has proliferated without forcing “conventional” food producers to label their products as such.  Why is this any different?  If the non-use of modern genetic modification techniques is that important to consumers, the information will out, label mandate or not.

That some consumers may want to know about how a product was produced should not, by itself, be sufficient for mandatory labeling.  Consumers may want to know all sorts of things about how products are made, or who made them, but we typically let the market provide such information.  Some consumers care about whether their clothes were made by unionized workers or poor children in developing nations.  Some want to know whether their food is organic, kosher, or produced humanely.  Still others may care whether a company’s executives support particular politicians or specific policies. (Just ask John Mackey.)  In all such cases, so long as there is no material difference in the product that could adversely effect the consumer, we leave the disclosure of such things to the private marketplace.  Why should genetically modified salmon be any different?