United Methodists Reach Out in Solidarity

The governing council of the United Methodist Church of the U.S. wants to make clear to American Muslims that its members firmly condemn the burning of the holy Qur’an and other acts of disrespect for Islam—and it’s putting its money where its mouth is. Noting with alarm the violence and danger to human life entailed in several retaliatory church burnings that occurred in Pakistan as the inevitable backlash to the provocative actions of Rev. Terry Jones, the United Methodists have made a very special offer to the worldwide Muslim community, to show their spiritual unity with Muslims who feel themselves threatened as a result of Jones’ actions.

“Every time a Qur’an is burned every religious believer in the world is threatened with harm. Each time a bigoted individual offends the sensibilities of a billion Islamic believers around the world by mocking or depicting the prophet Muhammad, each of us is sick at heart. We people of faith will not permit ourselves to be divided against each other by the apostles of intolerance. We will, we will not be moved. I noted with particular grief in recent days the latest, unavoidable consequence of Rev. Jones’ irresponsible and hurtful actions: the destruction of three churches in faraway Pakistan—attacks that entailed armed militants, the hurling of stones, and fires in which civilians could well have been injured. It is fortunate that fire-fighters did not reach any of these churches in time, or those public servants also might have been hurt. I hope that Rev. Jones looks deep into his conscience, and asks himself in prayer how much more damage he is willing to inflict on people of faith worldwide.”

Pausing for a moment, overcome by emotion, Bishop Itty continued by making a pledge of “unconditional solidarity” with Muslims worldwide. “I want to offer my Muslim friends a solemn promise: On the next occasion when someone commits such a bigoted act against Muslims, when a Qur’an is burned or desecrated anywhere in the world, we in the United Methodist community will respond promptly and concretely, by demolishing one of our own church buildings—safely, with the help of licensed explosives professionals, and under the supervision of the relevant local Islamic authorities. There is no need for armed militants or the use of force; I have asked Sheik Qaradawi to work with me and with Muslim groups in foreign countries to make sure that this process is orderly and non-violent, in the hope that we can take what might be a moment that divides Christians from Muslims, and instead make it into a celebration of unity.”

In a brief follow-up statement, Sheik Qaradawi accepted Bishop Itty’s offer. “We are willing to undertake this, out of honor for the prophet Isa (Peace be upon him), and as an act of mercy toward these People of the Book.” 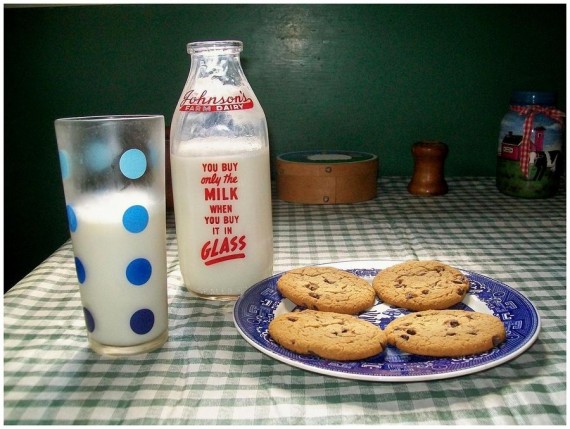 Radiation from the ongoing nuclear crisis in Japan continues to spread around the world:

Washington (CNN) — There is no health risk from consuming milk with extremely low levels of radiation, like those found in Washington state and California, experts said Thursday, echoing the U.S. Environmental Protection Agency.

“When we have a disaster like we’ve had with a nuclear power plant in Japan, we’re probably going to find things that are truly not a public health risk, but I think it’s very difficult for the public to assimilate this information and understand the risks,” said Dr. Wally Curran, a radiation oncologist and head of Emory University’s Winship Cancer Center.

The federal agency said Wednesday it was increasing its nationwide monitoring of radiation in milk, precipitation, drinking water, and other outlets. It already tracks radiation in those potential exposure routes through an existing network of stations across the country.

Results from screening samples of milk taken in the past week in Spokane, Washington, and in San Luis Obispo County, California, detected radioactive iodine, or iodine-131, at a level 5,000 times lower than the limit set by the U.S. Food and Drug Administration, officials said.

At that level, a person would have to drink 1,000 liters of milk to receive the same amount of radiation as a chest X-ray, said Dr. James Cox, radiation oncologist at Houston’s MD Anderson Cancer Center.

So, nothing to worry about. Still, I’m sure some people will panic. 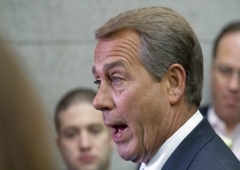 “Dangerous levels” of radiation will not reach American soil from Japan and nuclear power remains “an important part of our energy future,” President Obama said in remarks at the White House today. The Associated Press reports Obama tried to reassure the country as the U.S. ramps up efforts to measure the spread of radioactive material from the damaged Fukushima nuclear complex in Japan.

Obama said that he has asked the U.S. Nuclear Regulatory Commission to conduct a comprehensive review of the 104 nuclear power plants that provide 20 percent of the U.S. electricity supply.

A leading industry group agreed with the review.

“A review of our nuclear plants is an appropriate step after an event of this scale, and we expect that the Nuclear Regulatory Commission will conduct its own assessment,” said Marvin Fertel, president of the Nuclear Energy Institute. “The industry’s highest priority is the safe operation of 104 reactors in 31 states and we will incorporate lessons learned from this accident…”

Traces of radiation presumed to be from the Fukushima disaster were detected on the U.S. West Coast today.

Democratic Socialists of America reach their goal ahead of time

The largest socialist organization outside of the CPUSA (Communist Party U.S.A.) honest enough not to masquerade as something other than what they are.

The latest casualty estimates out of Japan are quite disheartening:

The terrible toll of Japan’s double disaster became clearer today as it emerged as many as 25,000 people could be dead.

As rescue crews trawled through mile after mile of tsunami-stricken wasteland, officials from the coastal town of Ishinomaki confirmed that 10,000 of their citizens were missing.

The unimaginable figure is the same given as in the town of Minamisanriku, also in Miyagi state, which lost around half its population when it was razed to the ground by the 20 foot high wall of water.

So far the official death tool has hit 4,340 with another 9,083 people missing. But there were very real fears tonight that the statistics were a terrible underestimate of those who perished in the tsunami.

Across the country some 434,000 people have been made homeless and are living in shelters.

Ken Joseph, an associate professor at Chiba University, is in Ishinomaki with the Japan Emergency Team.

And that doesn’t take into account, of course, any longer term casualties resulting from radiation exposure.

GOPer to Mueller: Why Doesn’t FBI Have To Reach Out To Baptists or Catholics Like It Does Muslims? 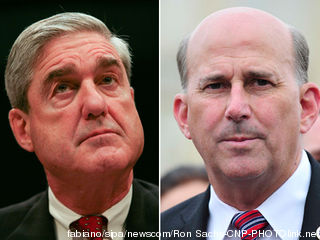 Rep. Louie Gohmert (R-TX) asked FBI Director Robert Mueller on Wednesday whether the bureau had any outreach programs specifically for the Baptist or Catholic communities like it did with the Muslim community.

“How is your outreach going with the Baptists or the Catholics?” Gohmert inquired.

“Do you have a particular program of outreach to Hindus, Buddhists, the Jewish community, agnostics, or is it just a particular outreach program for [Muslims]?” Gohmert pressed. “I’ve looked extensively and I haven’t seen anywhere … that there’s been an extensive outreach program to any other community trying to develop trust and this kind of relationship. And it makes me wonder if there is an issue of trust or something like that the FBI is seeing in that particular community.”

Mueller was appearing before the House Judiciary Committee’s hearing on FBI oversight. I caught up with Gohmert after the hearing to find out what he was getting at.

Mueller said in response to Gohmert’s question that the FBI’s citizens academies involve “individuals from a variety of segments” of the communities in which they operate.

“It doesn’t sound like there extensive outreach programs to all the other communities, so I think there’s a difference,” Gohmert told TPM.

Gohmert also pressed Mueller on the FBI’s relationship with the Council on American-Islamic Relations (CAIR). Mueller confirmed that the FBI cut off their formal ties to CAIR.

“We have no formal relationship with CAIR because of concerns with regard to their national leadership,” Mueller said.

“I would say we have very good relationships with Muslim communities around the country,” Mueller told members of the committee. “The Muslim community has been helpful in a number of cases which we have addressed since Sept. 11.”

Mueller, whose 10-year term in office began days before Sept. 11, said that another terrorist attack would be the “worst thing that could happen to the Muslim community” and that that Muslim-Americans are “for the most part are cooperative.”

“Across the country, I think those relationships were very, very good,” Mueller said.

But he defended the FBI’s sting operations, which have come under fire in some circles on allegations that the feds were entrapping Muslim youth.

“Secondly, I would say that they are subject to substantial review at headquarters and are monitored as they go forward not only by headquarters but also by U.S. attorneys offices where they take place to ensure that we are not entrapping individuals,” Mueller said.

The FBI director also said the bureau was focused “very intently” on domestic lone wolves dating back to the 1995 terrorist attack in Oklahoma City.

Rep. Steve King (R-Iowa) asked Mueller if the FBI had been prevented from entering any mosques in the course of their investigations.

“We are not restrained in undertaking investigations, but we are exceptionally sensitive to the fact that the First Amendment does protect speech and association,” Mueller said. “We are not constrained in pursuing an individual regardless of where they may be.”

Mueller said that generally a warrant is not required for an agent to sit in a mosque wearing a tape recorder but said there would have to be a predication for using that particular technique.

While he declined to weigh in on Rep. Peter King’s controversial hearing focusing on Muslim radicalization, Mueller said more generally that there had been a “number of cases” where the Muslim community had either initiated or cooperated with investigations.

Each day the news from Japan gets more grim, in terms of the death toll and the nuclear power plant crisis. Here’s the latest grim news: the death toll could reach 25,000:

The death toll in the double disaster to hit Japan is expected to reach 25,000, according to reports.

The number of those who lost their lives following the earthquake and tsunami currently stands at 3,676, while those missing is more than 8,000.

However, Kyodo News said the mayor of the town of Ishinomaki on the coast said the number of missing could hit 10,000.

The 10,000 figure is the same given for the missing in the port town of Minamisanriku, also in Miyagi state, which lost around half its population when it was razed to the ground by the tsunami.

Across the country some 434,000 people have been made homeless and are living in shelters.