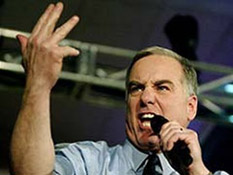 Rasmussen: Only 7% think government employees work harder than those in private sector

According to a Rasmussen Reports poll released today, just seven percent of Americans believe that government employees work harder than their counterparts in private sector. The same poll finds that 44 percent of government workers agree.

As we’ve learned recently, not only do public-sector workers get paid more than private industry employees doing comparable tasks, they get better benefits, they can retire earlier, and are much harder to fire.

Earlier today, I pointed to two polls showing new lows for Barack Obama on job approval, leadership, and re-elect numbers.  In doing so, I noted that both Quinnipiac and Gallup conducted their survey prior to the President’s speech on Monday night and that Obama might get a bump after belatedly explaining his new military adventure […]

Douglas Rasmussen’s response to my essay on “Neoconservatism Unmasked” doubles as a significant critique of Leo Strauss and provides an important defense of classical liberal moral theory. Rasmussen supports my interpretation and assessment of Strauss and the neocons while extending my critique by focusing on one crucially important aspect of Strauss’s thought: his criticism of modern natural-rights theory in the light of classical natural right.

According to Strauss, the modern natural-rights teaching focuses on the individual as the “center and origin of the moral world,” whereas classical natural right is concerned with man’s ends and with his duties. As I noted in Neoconservatism: An Obituary for an Idea, Strauss laments Locke’s “shift of emphasis from natural duties or obligations to natural rights.” He clearly prefers a world where “resigned gratitude and consciously obeying or imitating nature” is elevated, rather than a world where “man owes almost everything valuable to his own efforts” and where “self-reliance and creativity become henceforth the marks of human nobility.” In Strauss’s view, Locke’s natural-law teaching replaced the ancients’ and the Christians’ transcendent and intrinsic ethic of duty and self-sacrifice with a subjectively materialist and hedonist foundation that is grounded on the right to self-preservation and self-expression. Locke liberated man from the constraining bonds of nature, revelation, and the force of tradition and custom. His acquisitive bourgeois man lives an agitated but aimless life in the pursuit of property, pleasure and recreation. Strauss wondered how a regime founded on these Lockean premises could ever satisfy the highest aspirations of the human soul.

Rasmussen correctly suggests that Strauss was not only an opponent of the modern natural-rights philosophy but also wrong in his understanding of what rights are and the role they play in civil society. Rasmussen astutely notes that Strauss mischaracterized rights as “natural powers” rather than as moral principles. This is a profoundly important point. If rights are powers, then they are simply arbitrary assertions of human will and are therefore subjective. It is on this mistaken assumption that Strauss then reduces all modern thought to nihilism. Rasmussen does not and will not permit Strauss to demote the principle of rights to Hobbesian claims on behalf of the passions.

Rasmussen goes on to note (correctly in my view) that Strauss invokes several “false alternatives,” including reducing individualism and Lockean rights theory to subjectivism, amoralism, and atomism. Strauss’s goal, according to Rasmussen, is to wrench individual liberty away from “ethical knowledge and a life of morality and virtue.” Rasmussen will hear nothing of it, nor will I. In short order, Rasmussen pulls the rug out from underneath Strauss’s feet. Rasmussen (with his long-time co-author Douglas Den Uyl) indicates how the modern natural-rights teaching can be reconciled with—indeed, it must rest upon—a firm moral foundation (e.g., an Aristotelian “natural [biocentric-based] teleology”). In my view, rights make morality possible in a social context. In fact, one might very well argue that the doctrine of “rugged individualism” actually promotes social cooperation and voluntary association, while various forms of collectivism actually promote anti-social atomism.

In The Green Room: Scott Rasmussen on Obamacare’s Unpopularity

Pollster Scott Rasmussen joined us “In The Green Room” to discuss Obamacare on the eve of its one year anniversary. We discussed how the law has remained consistently unpopular—from about 54% of Americans favoring repeal one year ago to 53% still favoring repeal nearly one year later.

As Mr. Rasmussen pointed out, this is still an issue on the minds of many voters, especially among seniors who are likely impacted most by the new law. While admitting that attention to this issue may not always be this high, Mr. Rasmussen suggested that it will continue to weigh on Americans’ minds. “They will be interested when they see it impacting their life,” he explained, “And that could be in terms of expanded deficits—which is sort of a distant relationship—or it could be when they have to change their insurance coverage or when their doctor says, ‘I have to do this because of the health care law.’”

But while the future may be unclear, one thing is certain: this issue is not going away any time soon.

Once again President Barack Obama finds himself at a -18% Presidential Approval Index in the most recent Rasmussen poll. The One’s lack of leadership with a budget and reducing the deficit, providing strong talk on Libya and doing nothing and the rising cost of gasoline which will affect the economy could spell diasater for Obama. The Middle East is in turmoil, Japan in a humanitarian crisis, and the United States economy still fragile as gas gets near $ 4 per gallon … yet Obama yuks it up. More than two years into his presidency and he still cannot connect with the People.

The Rasmussen Reports daily Presidential Tracking Poll for Sunday shows that 24% of the nation’s voters Strongly Approve of the way that Barack Obama is performing his role as president. Forty-two percent (42%) Strongly Disapprove, giving Obama a Presidential Approval Index rating of -18 (see trends).

Rasmussen survey: “only 10% of all voters think American Muslims are speaking out enough against potential terrorist attacks in the United States”

Does that make the other 90% of Americans a bunch of blazing Islamophobes? “Just 17% Believe American Muslims Are Treated Unfairly,” from Rasmussen Reports, March 11 (thanks to all who sent this in):

Most voters don’t believe their fellow citizens are unfair to Muslim Americans. They also think Muslims in this country should be louder in their criticism of potential domestic terrorist attacks.

A new Rasmussen Reports national telephone survey finds that just 17% of Likely U.S. Voters believe that most Muslims in America are treated unfairly because of their religion and ethnicity. Sixty-three percent (63%) disagree and say they are not treated unfairly while 20% are not sure. […]

A plurality (49%) of liberal voters, however, says there is bias against Muslim Americans. Eighty-one percent (81%) of conservatives and 57% of moderates disagree.

Those figures are similar to those found in a survey of all adults in September 2009. At that time, 15% believed that Muslims in this country were speaking out and 46% said they were not.

The House Committee on Homeland Security began hearings yesterday about the potential danger of domestic Islamic terrorism, and a sizable number of voters think the government is not paying enough attention to this possible threat. Most voters still worry, too, about homegrown terrorist attacks. …

Rasmussen: Majority wants out of Afghanistan within a year 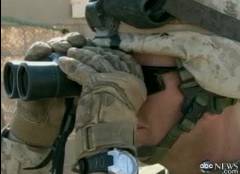 One of the few areas where Barack Obama and Republicans have largely agreed has been prosecuting the war in Afghanistan.  Obama ran on the promise to fight the Taliban more robustly, and he has delivered on that promise with escalations in troop commitments and a significant increase in drone attacks across the border into Pakistan.  […] 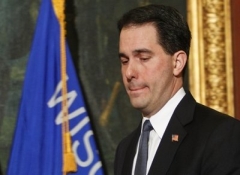 A grim follow-up to yesterday’s grim poll on opposition to his collective bargaining bill. Even more painful than the raw numbers is the fact that it’s soft support among Republicans that’s killing him. A new Rasmussen Reports telephone survey of Likely Wisconsin Voters finds that just 34% Strongly Approve of the job he is doing, […]

Even their skewed polling sample finds that Scott Walker has over-reached. 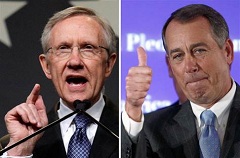 If Congressional Republicans need a little spine-stiffener in the budget battle, Rasmussen provides just the tonic.  This poll question differs from the earlier survey by The Hill on the question of a government shutdown.  Rather than focus on blame, Rasmussen instead asked about priorities in the debate over spending, and clearly the priority of the […]

Rasmussen: Majority of Americans are not in Favor of Teacher’s Unions

A recent Rasmussen poll states that a majority of Americans thing that being a teacher is an essential and important job; however, it is a much different outcome when asked when teachers should be unionized. 46% say that unionized teachers are a bad thing, while only 37% say its good.  In other words, the public opinion is that unions offer nothing but a restriction to teachers and ultimately the students.

Americans continue to believe strongly that being a teacher is an essential job, but a plurality thinks it’s a bad thing that most teachers are unionized.

A new Rasmussen Reports national telephone survey finds that 68% of American Adults view being a teacher as one of the most important jobs in our country today, down five points from May of last year but up slightly from when we first asked the question in May 2008. Twenty-one percent (21%) say it’s not one of the most important jobs, and 12% aren’t sure. (To see survey question wording, click here.)

Rasmussen: Majority of Americans are not in Favor of Teacher’s Unions

A recent Rasmussen poll states that a majority of Americans thing that being a teacher is an essential and important job; however, it is a much different outcome when asked when teachers should be unionized. 46% say that unionized teachers are a bad thing, while only 37% say its good.  In other words, the public opinion is that unions offer nothing but a restriction to teachers and ultimately the students.

Americans continue to believe strongly that being a teacher is an essential job, but a plurality thinks it’s a bad thing that most teachers are unionized.

A new Rasmussen Reports national telephone survey finds that 68% of American Adults view being a teacher as one of the most important jobs in our country today, down five points from May of last year but up slightly from when we first asked the question in May 2008. Twenty-one percent (21%) say it’s not one of the most important jobs, and 12% aren’t sure. (To see survey question wording, click here.)

In a Rasmussen Reports poll released this morning, 46 percent of adult Americans believe that having unionized teachers is a bad thing, 37 percent disagree.

The unions are losing, the taxpayers are winning.