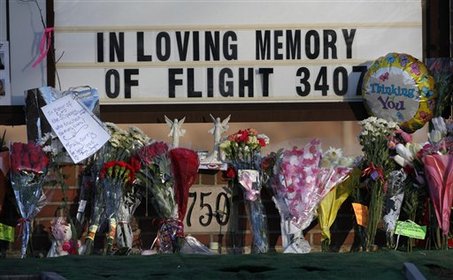 In February 2009, Continental flight 3407, operated by Colgan Air, plunged into a suburb of Buffalo, NY, killing all 49 people on board and one person on the ground. Pilot error was named as the chief cause of the crash, and investigators focused on pilot fatigue as one of the primary problems. The co-pilot had taken a cross-country, overnight flight the day before the crash, and only slept briefly in an airline lounge before she was required to pilot the flight.

When the plane encountered an ice storm as it attempted to land in Buffalo, the pilots struggled to respond appropriately, and The National Transportation Safety Board found that their “performance was likely impaired because of fatigue.” Both pilots were heard yawning on the cockpit voice recorder.

Families of the victims channeled their grief into action in the following months, launching a 15-month campaign to convince Congress to enact a variety of pilot performance safeguards. The bill passed last summer and, among other things, required the FAA to create tougher rules aimed at controlling pilot fatigue.

But today, the Republican House of Representatives passed an amendment sponsored by Rep. Bill Shuster (R-PA) to a Republican-drafted aviation bill that would essentially gut the planned pilot fatigue rules by requiring extensive tailoring to many different segments of the aviation industry, and exempting several others.

Hero pilot Chesley “Sully” Sullenberger blasted the amendment yesterday before it passed, saying “it creates a huge obstacle to new regulations,” and that, “at some point in the future, we don’t know when, it’s likely people will die unnecessarily.” Last night on the Ed Show, Sullenberger said the bill is a “slap in the face” to the Flight 3407 families. He also decried “special interests only interested in the bottom line.”

Family members of those killed on Flight 3407 are already speaking out against the Republican vote. “You can try to dress this up however you like, but we all know which special interests that [the amendment] is attempting to help and what it’s attempting to do for them, which is make it more difficult for the FAA to do its job and regulate them,” said Susan Bourque, who’s sister, Beverly Eckert, was killed in the crash.

Eckert’s husband, Sean Rooney, was killed in the Sept. 11 terror attacks, and in the years following his death, Eckert became a leading 9/11 activist and helped lead the push for the 9/11 Commission. She was flying to Buffalo that evening to attend the unveiling of a scholarship in her late husband’s name.

Sen. Charles Schumer (D-NY) has vowed to prevent the Shuster Amendment from becoming a part of the final aviation bill, after the House and Senate versions are reconciled.

What’s Going On At Uproxx

Wow.  Go read this article by Rowan Scarborough at the Washington Times and let us know what you think.  Here’s a taste:

…The foundation‘s official history slide show featured four “firsts” for women, such as the first female operations officer in 1992. It also accentuated humanitarian missions. But it devoted only two slides to World War II and barely mentioned Vietnam, during which the Navy orchestrated a decade of multiple aircraft carrier operations.

“There is ‘history’ and then there is ‘revisionist history’ written to support a political agenda,” said Roy Stafford, a former Marine attack aircraft pilot. “This timeline offered up the first female naval aviator and first female navy astronaut and first black Blue Angel pilot as major milestones and high-water marks for naval aviation to the exclusion of the real history makers. That just didn’t sit well with my simple Marine Corps mind.”…

Read the whole article at the Washington Times. 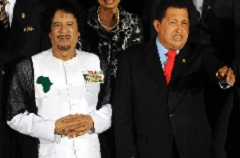 On the way to Venezuela or to a “last stand”?

We’ve been hearing rumors of this since last night, but nothing substantive has been reported on Moammar Gaddafi’s whereabouts.  His son Saif al-Islam Gaddafi appeared on national television yesterday insisting that his father was fighting with the army and would not retreat until the “last bullet,” but the British Foreign Secretary says diplomatic sources suggest […]

There may be such a thing as a federal regulation we wouldn’t be better off without — but not when it comes to Big Sis’s TSA:

When this mishap comes about, our rulers will have a perfect excuse to forbid pilots from carrying defensive weapons. Otherwise, instead of the absurd padlock they would give the pilots toy bullets — like Big Sis does with the Border Patrol.

On a tip from B1bbet.

Pilots at three airlines are demanding that they be treated with respect and that management negotiate a fair deal with them. The pilots for Continental Airlines and United Airlines, which merged last month, are conducting informational pickets to inform passengers of management plans to expand the practice of outsourcing flying to other airlines.

The pilots, members of the Air Line Pilots (ALPA), plan to picket tomorrow in Chicago, home of United. Last week they held informational pickets in Newark, N.J., and Houston, two of Continental’s major hubs. The pilots, who are in contract negotiations with the newly merged airline, say management wants to use outsourced 70-seat jets and nonunion pilots on some regional flights from Continental hubs, a practice the union believes violates the Continental pilots’ current contract.

“The pilots of Continental and United are unified on the issue of protecting the jobs of our pilots, and to stop the outsourcing of our flying,” said Capt. Jay Pierce, chairman of ALPA’s Continental pilots unit.

We would hope management isn’t attempting to circumvent the bargaining process. It would serve the new United well to establish a productive labor-management relationship, and concentrate on reaching an agreement…rather than willingly violate our existing contract by introducing regional jets to markets where Continental pilots should be flying.

Management’s concept [of using] outsourcing…is based on outdated business models that simply fail to recognize that the business of an airline is to fly—not to outsource flying to the lowest bidder or to merely act as a ticket agent.

Meanwhile, the crew members at Evergreen Airlines finally are running out of patience and will begin voting Dec. 1 on whether to authorize a strike if talks are not successful. The workers have been locked in negotiations over a new contract for six years. They overwhelmingly rejected a tentative agreement in August. The crew members have not had a pay raise in six years and no per diem increase since the early 1990s.

“We certainly want a contract, not a strike,” said professional flight engineer William Fink, chairman of the Evergreen ALPA unit.

That has been our goal since day one more than six years ago—but the new agreement must provide our members with industry-standard wages, work rules and benefits. We deserve no less.

Evergreen crew members operate a fleet of Boeing 747s and specialize in charter and contract freighter operations around the globe from their hub cities of New York and Travis Air Force Base, Calif.

No Way! More TSA B.S. Straight From The Pilots

Kinda like doctors hate Obamacare for obvious reasons-they know what’s going to fail. Pilots hate the TSA. Eh, but who listens to them?

In the first years of the state, Cuban planes and pilots brought nearly 150,000 Jews to Israel from Iraq, Iran, Yemen and India, the official Cuban newspaper Juventude Rebelde (Rebel Youth) reported on Saturday. Unreported for 60 years, the airlift was one of the largest in history.

In the years after Israel declared independence, Jews in Arab countries began emigrating to Israel as their lives became more difficult. However, due to the lack of cooperation by the Arab governments, traveling by land was very difficult. Since there were no diplomatic relations between Israel and the Arab countries, it was necessary for the aircraft to be from a neutral country, according to the Juvente Rebelde report.

The Cuban connection stemmed from someone in the Israeli trade mission in New York’s close friendship with Cuban businessman Narciso Otero-Roselló, a licensed pilot, according to the report. The businessman became president of new air company, Aerea de Cuba, which took ownership of the aircraft to be used in the years-long airlift and established offices in Havana and Nicosia in Cyprus.

The Cuban pilots who flew the planes on the historic mission recalled several close calls to Juvente Rebelde. They told of dust storms suffocating their engines in Iraq, making stops on desolate airstrips in Oman when making the long flights from India to Israel, emergency landings, and crashes while transporting Jews to Israel.

In early 1953, when their special mission was completed, the pilots returned to Cuba, Juvente Rebelde reported. This newly discovered chapter in Jewish and Israeli history shows how far-off countries assisted the Jewish people in the building of the state of Israel.

I found the original article in the Cuban magazine, although it is possibly the slowest Internet connection I’ve been on since 1994. And the end of the article goes on to talk about Israel’s “genocide” of Palestinian Arabs. But it looks very interesting!

Here’s why the UN appointed that alien emissary: Aliens have deactivated British and US nuclear missiles, say US military pilots

Most of know that aliens are here:  Obama, Biden, Kerry, Boxer, Obama’s aunt … but here’s the scoop from the front line:

The beings have repeated their efforts in the US and have been active since 1948, the men said, and accused the respective governments of trying to keep the information secret.

The unlikely claims were compiled by six former US airmen and another member of the military who interviewed or researched the evidence of 120 ex-military personnel.

The information they have collected suggests that aliens could have landed on Earth as recently as seven years ago.