Currently viewing the tag: “into”

Andrew Gelman isn't surprised that the Tea Party has lost its punch in Washington:

To put it another way, the Tea Party voters did their job, just as the Obama voters did their job two years earlier.  They expressed their preferences and changed the government.  Now it’s the politicians turn to do their jobs, which is not to follow the wishes of their more extreme supporters, but to govern in a way such as to earn majority support in two years. 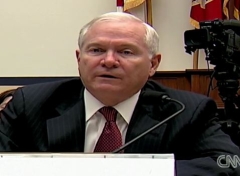 He didn’t use the R-word but it’s easy to read between lines as broad as these. A vignette from this morning’s House hearings on Libya, in which a glum SecDef gamely tried to choke down the “turd sandwich” currently being served by his boss: Defense Secretary Robert M. Gates reiterated Thursday that the U.S. would […]

Why Doesn’t AARP Put any of Its Windfall Profits into Its Charitable Activities?

Yesterday, I noted that AARP’s main ‘business’ is renting its name to insurance companies selling policies to senior citizens. It’s a robust business that has grown rapidly over the last few years. In 2002, AARP collected around $ 240 million renting its name. By 2009, that figure had almost tripled to $ 657 million a year. (Nice work if you can get it.)

At least, AARP, Inc., who sells the naming rights could use this windfall to further their important charitable work, right?

As the above chart, from yesterday’s House Ways and Means Committee report, shows, while AARP Inc.’s royalty income from insurance companies was exploding, the money it committed to its charitable activities essentially flat-lined.

AARP Inc.’s contributions to the AARP Foundation grew by only $ 3.1 million between 2002-2008, a meager 11% increase. Its contributions to AARP’s Legal Counsel for the Elderly actually contracted by $ 300,000, representing a 9% decline.

So, AARP, Inc. has collected billions of dollar in royalty fees from insurance companies, but has put a net couple million extra dollars into its charitable activities. Where did the rest of the money go?

If only we had reporters who would actually ask these questions.

Rep. Tom Marino (R-PA), a member of the House Foreign Affairs Committee, told the Scranton Times Tribune that he supports efforts to remove Moammar Gadhafi from power in Libya but said President Obama should have consulted Congress before acting.

Said Marino: “Where does it stop? Do we go into Africa next? I don’t want to sound callous or cold, but this could go on indefinitely around the world.”

Of course, Libya is in Africa.

Tweet
Tagged with: Africa’ • could • Escalate • into • Lawmaker • Worried

Rep. Tom Marino (R-PA), a member of the House Foreign Affairs Committee, told the Scranton Times Tribune that he supports efforts to remove Moammar Gadhafi from power in Libya but said President Obama should have consulted Congress before acting.

Said Marino: “Where does it stop? Do we go into Africa next? I don’t want to sound callous or cold, but this could go on indefinitely around the world.”

Of course, Libya is in Africa.

Tweet
Tagged with: Africa’ • could • Escalate • into • Lawmaker • Worried

GOP Rep. Tom Marino On Libya: ‘Where Does It Stop? Do We Go Into Africa Next?’

Speaking with the Scranton Times-Tribune on Tuesday, freshman lawmaker Rep. Tom Marino (R-PA) expressed mixed opinions about the Obama administration’s actions in Libya. He told the paper that he “supports” the intervention, but wishes that the administration had consulted with Congress first.

Marino, a member of the House Foreign Relations Committee and the House subcommittee on issues related to African foreign policy, then posed an odd question:

“Where does it stop?” he said. “Do we go into Africa next? I don’t want to sound callous or cold, but this could go on indefinitely around the world.”

Competing for the most confused assertion on Libya, Rep. Lou Barletta (R-PA), Marino’s colleague in the House and the other lawmaker quoted in the Times-Tribune article, echoed an argument made by Libya strongman Muammar Qaddafi by floating the idea that the idea that al Qaeda may be in control of the rebel forces in Libya. As the paper noted, “At the moment, there are no indications of al-Qaida influence among the rebels.”

The Hardest Year To Get Into College

“We already know this will be the hardest year in history for college seniors,” says [Michele Hernandez, president of Hernandez College Consulting]. She cites more kids applying, while most schools aren’t increasing their class size. It’s an unforgiving formula. “A few years ago, kids were applying to four or five schools,” says Greg Roberts, dean of admission at the University of Virginia. “But now it’s not uncommon to apply to 10 or 12 or in the extreme even 20 or 30.”

The Hill’s Jason Millman is reporting that Joel Ario, who oversees the exchanges for the Department of Health and Human Services, is trying to calm fears that employers would seek to dump their workers into the exchanges once they become operational in 2014. Many conservatives and some employer groups are arguing that the government may be underestimating the shift, but Ario is taking the tact of arguing that if the exchanges provide more efficient coverage, so be it:

“They’ll continue to provide it, and we may wind up with an employer-based system for a long time because exchanges may not develop,” Ario said.

However, if the exchanges prove to be a source for better and cheaper coverage, then employers will be incentivized to scrap their health plans.

“If it plays out the exchanges work pretty well, then the employer can say ‘This is a great thing. I can now dump my people into the exchange and it would be good for them, good for me,’ ” Ario continued.

This sounds right, but it’s worth noting that some economists are predicting that the actual shift will be quite mild, since “firms would need to compensate the workers from whom they remove a current benefit.” In fact, a survey of 2,800 businesses conducted by Mercer in 2010 found that employers are “not likely” to stop providing health insurance coverage out of a reluctance of losing control over a key employee benefit. Massachusetts — which has a much more robust employer requirement than the ACA — actually experienced an increase in employer coverage after reform.

After the first 10 years, the Congressional Budget Office estimates that “the number of people obtaining coverage through their employer would be about 3 million lower in 2019 under the legislation.” Actuaries at CMS estimated that just 1.4 million would move out of employer coverage.

Once again it has happened. At a demonstration in front of the Berlin Hauptbahnhof on 27 March 2011, that called for a boycott against Israel, police took two men into custody because they refused to cease their peaceful expression of solidarity with Israel by displaying an Israeli flag.

On March 27 2011 there was a demonstration at the Berlin Hauptbahnhof exhibition. The State of Israel was accused of apartheid (an almost racist comparison) and a boycott of Israeli products was demanded. The brutal terrorist acts against Israel, however, have been omitted, downplayed or justified.

At some point two people at the exhibition held up an Israeli flag. That’s all they did! They did not interfere, they didn’t scream, nor did they riot. Neither did they chant anti-Palestinian slogans, nor did they display any signs with anti-Palestinian views. They only peacefully showed the Israeli flag, to ensure that Israel is not looked upon as the devil, as the Palestinian Hamas claimed, but a lovely country with good and bad sides.

They were thus not so pro-Israel, because to display a flag purely shows that the country has a right to exist, can not really proven to be sign as a special affection. There is no special sign of affection, To say that defense of Israel’s right to exist is “pro-Israeli” is as absurd as to assert that one is pro-Jewish by being against Auschwitz and the extermination of Jews. The condemnation of the Holocaust is, of course, not pro-Jewish, but simply pro-human, like the condemnation of the desire for the destruction of Israel nor pro-Israeli but simply is pro-human.

When the demonstrators turned to the police, the police did not defend right of two people to hold the flag of a peaceful democratic country, but instead they took down the flag of Israel and took the two people in custody.

The entire post is worth reading, even in autotranslation, as the author is indignant with the direction that Germany is going.