Semantic sanity into the pages of the Times — if only for one brief moment.

Pakistani Actress Defies Mullahs Who Accuse Her of ‘Immorality’

This is an amazing video that’s in the process of going viral.

Pakistani actress Veena Malik committed a grave sin, apparently..she appeared on an Indian TV show dressed like a modern 21st century woman and actually behaved with love, decency and tolerance towards the Hindus in the cast.

Because of that, she’s being roundly condemned in Pakistan and is under a death fatwa from the Taliban.

But that hasn’t affected her raw courage at all, as she lays into an obscene, hypocritical Muslim cleric who denounces her for her ‘crime’…appearing on the Indian “Big Brother” show to show the Indian public across the border that not every Pakistani is a savage, hate-filled monster and that there are Pakistanis like her that ‘who believe in love, entertainment and fun.’

Unfortunately, there are a lot more Pakistanis like the cleric than there are like Veena Malik. I hope she’s taking adequate precautions.

When a Wisconsin trial court judge struck down Wisconsin’s new collective bargaining law, she issued an injunction forbidding the state from both enforcing the law, and from publishing it as part of the official Code of Wisconsin. Despite the fact that the order is still in effect, the state has gone ahead and published the law:

In a stunning twist, Gov. Scott Walker’s legislation limiting collective bargaining for public workers was published Friday despite a judge’s hold on the measure, prompting a dispute over whether it takes effect Saturday.

The measure was published to the Legislature’s website with a footnote that acknowledges the restraining order by a Dane County judge. But the posting says state law “requires the Legislative Reference Bureau to publish every act within 10 working days after its date of enactment.”

The measure sparked protests at the Capitol and lawsuits by opponents because it would eliminate the ability of most public workers to bargain over anything but wages.

Laws normally take effect a day after they are published, and a top GOP lawmaker said that meant it will become law Saturday. But nonpartisan legislative officials from two agencies, including the one who published the bill, disagreed.

Walker signed the bill March 11. Under state law, it must be published within 10 working days, which was Friday.

It hasn’t been printed in the Wisconsin State Journal, the official state newspaper, as other laws are. Late Friday, State Journal publisher Bill Johnston said in an e-mail that the notice for the law had been scheduled to run but had been canceled. He did not elaborate.

La Follette urged caution Friday, saying the measure has not been published yet by his office. He said he believes the law cannot go into effect until he directs the State Journal to publish it, which he has not done.

While I’m not familiar with Wisconsin law, I can’t imagine that the law could have any legal force and effect as long as this injunction is in place. Technically, it may not have been a violation for the reference bureau to publish the law since they weren’t parties to the injunction, but it most assuredly violates the spirit of the judge’s ruling. I would expect the parties to be back in court on Monday over this one.

And for those who may have wondered (I did), Secretary of State LaFollette is indeed distantly related to the famous Progressive Republican Robert LaFollette. His great-grandfather and “Fightin’ Bob’s” father were brothers.

After proclaiming a cease-fire, Colonel Muammar Qadhafi’s regime cynically ordered its troops to attack Benghazi, the leading rebel stronghold, in defiance of the U.N. Security Council resolution prohibiting attacks on civilians. The regime hopes to consolidate control in Libya’s second-largest city before the U.N.-backed military forces can begin counter-attacks.

Once entrenched in the city, Qadhafi’s thugs can wreak vengeance on opposition supporters with minimal risk of attack from U.N.-backed forces pledged to halt civilian deaths. Qadhafi seeks to exploit the fact that he is much more willing to shed Libyan blood than is the U.N. coalition. He knows that it will be much more difficult for the coalition to compel him to withdraw his forces than it would be to prevent him from advancing, once the air umbrella is completely established.

French President Nicolas Sarkozy today convened a summit of Western and Arab leaders in Paris and emerged to announce, “Our planes are already preventing air attacks on the city,” and noted that military action was supported by France, Britain, the United States and Canada, as well as unspecified Arab nations. French reconnaissance planes reportedly already have been deployed over Libya, and attacks on ground targets may be imminent. American, British, Canadian and Danish warplanes also reportedly are deploying to NATO bases in southern Europe.

President Obama announced American support for the U.N. operation in a speech on Friday:

Now, once more, Moammar Qaddafi has a choice. The resolution that passed lays out very clear conditions that must be met. The United States, the United Kingdom, France, and Arab states agree that a cease-fire must be implemented immediately. That means all attacks against civilians must stop. Qaddafi must stop his troops from advancing on Benghazi, pull them back from Ajdabiya, Misrata, and Zawiya, and establish water, electricity and gas supplies to all areas. Humanitarian assistance must be allowed to reach the people of Libya. Let me be clear, these terms are not negotiable. These terms are not subject to negotiation. If Qaddafi does not comply with the resolution, the international community will impose consequences, and the resolution will be enforced through military action.

The United States joined a statement warning the Qadhafi regime that a cease-fire must begin “immediately” in Libya and its troops must withdraw from rebel areas, particularly the cities of Benghazi, Misrata, Ajdabiya and Zawiya. The statement also called for the restoration of water, electricity and gas services in all areas. It said Libyans must be able to receive humanitarian aid or the “international community will make him suffer the consequences” with military action.

Secretary of State Hillary Clinton today said that the United States would use its “unique capabilities” to assist the operation. This hints at a substantial American contribution in intelligence-gathering, surveillance, reconnaissance and offshore naval capabilities, as well as U.S. warplanes being deployed to various bases.

With hostilities imminent between the U.N.-backed coalition and the Libyan regime, it is clear that the Libyan crisis has entered a new phase. The populist uprising, on the verge of being crushed, now has received international protection. After it has repulsed Qadhafi’s lunge to seize Benghazi, the coalition will begin what is likely to be a protracted campaign to pry the regime’s goons away from opposition forces. Libya is likely to dissolve into two warring rump states, with Qadhafi loyalists in the west perpetually clashing with opposition forces, primarily based in eastern Libya. The liberated zone in the east will require substantial international assistance to survive the counter-revolutionary backlash. And military action may be needed immediately to block regime offensives against opposition enclaves in western Libya.

Once the smoke clears from the military operations that appear imminent, the U.N. coalition is likely to find itself in the position of trying to negotiate with a megalomaniac mass murderer in order to protect victimized Libyans and a wide variety of other targets of Qadhafi’s vengeance.

ABC New’s Sunlen Miller reports: President Obama said today he doesn’t believe they will be able to fully resolve the budget debates by next week’s March 18th deadline so one more continuing resolution will likely be needed. “I think, neither… 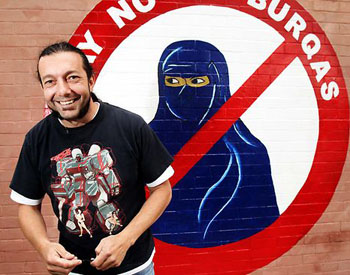 Standing up for women’s rights gets you called “racist and inflammatory” these days, and Leftist fascists and Islamic supremacist thugs will do all they can to silence you. “Sculptor Sergio Redegalli defies ‘bullies’ and refuses to take down anti-burka mural,” from The Australian, January 19 (thanks to Darcy):

A SYDNEY artist whose anti-burka mural has infuriated left-wing and Islamic activists is vowing that the provocative artwork will stay in place despite death threats, abuse, a string of vandalism attacks, a violent weekend protest and a police request to remove it.

Newtown glass sculptor Sergio Redegalli has this week restored the mural painted outside his studio for more than the 40th time after dozens of graffiti and paint-bomb attacks by protesters who say it is racist and inflammatory.

In the latest incident last Sunday, a crowd of 50 activists hurled paint at the mural and then turned on police who had to call in reinforcements to restore order.

Seven men were arrested and charged with offences including resisting police, assaulting police and destroying or damaging property.

The charges will be heard in Newtown Local Court next month. Redegalli blames local left-wing groups, rather than Muslim activists, for the incident.

The sculptor, who is a well-known figure in inner-suburban Newtown, says he has since been visited by local police who asked him to take down the mural after learning of a threat to fire-bomb it.

He refuses to do so in the interests of free speech and public debate.

“I’m not going to let the bullies win,” Redegalli told The Australian yesterday.

“I’m not doing it for pride (but because) I don’t believe bullies have the right to stand over people and deny us our freedoms.”

Redegalli painted the mural and slogan “Say no to burqas” on an exterior wall of his glassworks last September, after a local fashion designer received death threats over a plan to feature models wearing the traditional Islamic garment in a fashion parade.

The artist says his objective is to promote debate about the Islamic face veil, which he sees as a symbol of repression and violent extremism….

“Cuomo To Not Investigate Funds For Islamic Cultural Center,” from NY1 News, September 2 (thanks to Pamela Geller, who has a series of links to mosque leaders’ questionable activities and ties here):

State Attorney General and gubernatorial hopeful Andrew Cuomo said Thursday he has no plans to investigate the Islamic community center and mosque.

According to a recent poll, seven out of 10 New York State voters say they want him to look into the project’s financing.

Cuomo said he could not investigate the fundraising for the project because so little money has been raised so far.

He said his office would also need cause to probe the group.

“I hope nobody is suggesting this is a religion that some people don’t like and therefore we should start a government investigation. That would be a terrible and dangerous precedent,” said the Democratic candidate.

Cuomo did note that if anyone has evidence that the project has terrorist ties, that might be cause for an investigation….

“Report: Ground Zero Mosque Investor Contributed to Designated Terror Group,” from FoxNews.com, September 3 (thanks to all who sent this in):

A key financial backer of the proposed Islamic center near Ground Zero once contributed to a U.S.-designated terror group, MyFox New York reports.

Egyptian-born businessman Hisham Elzanaty, who made what is described as a “significant investment” in the Ground Zero mosque project,contributed more than $ 6,000 in 1999 to the Holy Land Foundation for Relief and Development, also known as HLF, tax records show.

The donations came two years before the federal government shut down HLF and designated it a terror group. Elzanaty’s attorney told MyFox New York that his client believed at the time that he was donating to an orphanage. Elzanaty did not respond to questions.

Federal investigators say the group was set up as a Texas-based charity, but in fact supported Hamas….