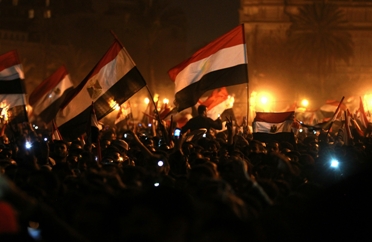 As we watch the Egyptian revolution unfold half-way across the world, George Washington’s words come to mind:

Nothing can be taken for granted with revolution—and nothing is certain about Egypt’s future.

In the wake of Mubarak’s departure, CNN characterized Egypt’s revolution as “people from every walk of life…united in a common cause…to reclaim their dignity, control of their lives and the right to determine their government.”  Many hoped, and even expected, that an educated and proactive populace would damper the influence the Muslim Brotherhood.  Unfortunately, this extremist group—which worries everyone except Jimmy Carter—has established a working relationship with the Egyptian military and appears to be gaining influence.

Recently, the New York Times shared “growing evidence” of the Brotherhood’s influence over the outcome of Egypt’s referendum.  Blitzing TV networks and distributing propaganda, the Brotherhood encouraged Egyptians to vote for a quick election scheduled in September, thus giving newer parties less time to organize.  If the Muslim Brotherhood is the only effective and well-established political party five months from now, Egyptians will be left with few electoral options and their revolution may be endangered.

As September approaches, we hope that the Egyptian people will refuse to be lured into the excesses of popular passion, which could endanger the safety of ethnic and religious minorities, including Egypt’s substantial Christian population. Exhibiting this vigilance in his timeless Federalist #51, Madison observed: “If a majority be united by a common interest, the rights of the minority will be insecure.” We must moreover hope that the military can find inspiration in the actions of then-General George Washington and relinquish power when a government is elected.  As Thomas Sowell argues, whether or not they follow a model of successful democratic revolution largely depends on whether “the preconditions for freedom and democracy” exist.

Amidst these uncertainties, it is helpful to remember that this isn’t the first time Americans have watched an overseas revolution.  Alexander Hamilton, in 1794, grappled with the nature of the French Revolution and whether a man like Robespierre was “predominant in influence as in iniquity.”  Ten years later, Latin American nations sought U.S. aid as they fought for independence.  President Monroe eventually recognized the new republics for the same reason Washington left the French revolutionaries to their own devices: prudence.  While Latin American nations successfully transitioned into working democracies, France fell from anarchy into tyranny.  Mubarak’s departure is only the beginning, and the ultimate influence of the Muslim Brotherhood is yet to be seen.  Time will reveal the true character of this revolution.

Michael Sobolik is currently a member of the Young Leaders Program at the Heritage Foundation.

People sometimes look at the sometimes-pathological political process in the United States and then look at rapid economic growth in the People’s Republic of China and conclude that somehow in an authoritarian country you don’t have politics or special interests. But it’s not true, politics happens everywhere—China, America, North Korea, anyplace. The recent events in Egypt have brought forth a lot of stories that illustrate the point well, including today’s Anthony Shadid article on a town built by patronage.

Defending Egypt’s Autocracy, Huckabee Warns Of The ‘Cascading Effects’ Of Democracy Across The Middle East 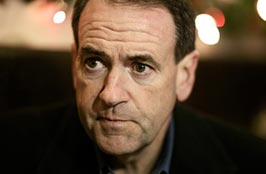 Today, more than a million Egyptians appeared in Cairo’s Tahrir Square to demonstrate against the Mubarak regime and call on the long-time autocrat to step down from power and hold free and fair elections.

This morning, former Arkansas Gov. Mike Huckabee (R) — fresh from joining a ceremony for a newly built illegal Israeli settlement — called in to Fox & Friends and discussed the situation in Egypt. He complained about the Obama administration’s response to the protests, saying that it showed that the United States has “abandoned a 30-year ally” and said that there are concerns that the protests “could have cascading effects across the Middle East.”

This took Fox host Gretchen Carlson by surprise, who said that she thinks “there’s a difference in supporting a country like Israel as a friend and supporting a country like Egypt as a friend.” Coming to the defense of a dictator, Huckabee responded by saying that he wanted an acknowledgement that Mubarak “had, in fact, not done everything wrong,” and that he had brought “stability” to the country:

HUCKABEE: Well, I had a meeting with Prime Minister Netanyahu yesterday. And I met with about 15 Knesset members, had breakfast with about 20 European Parliament members. The overall consensus is two-fold. First, real shock and surprise down to the average on the street Israeli citizen at how quickly the Obama administration abandoned a 30-year ally and a long standing friend to peace and stability President Mubarak. I don’t think anybody is trying to defend everything he did as President, but they would’ve liked to have seen at least an acknowledgement that he’s been a friend these years. […] The second concern is that this could have cascading effects across the Middle East.

HUCKABEE: There’s been a long-time concern from the part of Americans as to some of the heavy-handed ruling of Mubarak. I don’t think anyone was expecting there to be a wholesale endorsement or even an indication that they hope he stayed. But just simply an acknowledgement that he had, in fact, not done everything wrong, and had brought stability, and had kept a strong even keel to the peaceful nature of the border between Israel and Egypt.

To start with, it isn’t true that the Obama administration immediately washed its hands of Mubarak. Vice President Joe Biden denied that Mubarak was a dictator, and Secretary of State Hillary Clinton actually did refer to Mubarak as a long-time “partner” to the United States and a force of “stability,” to the chagrin of Egyptian activists like Mohamed El Baradei, who want to see the administration completely withdraw its support from the Mubarak government.

Secondly, it’s odd that Huckabee is citing concerns of “cascading effects” across the Middle East and the toppling of other autocratic regimes like Jordan given that such an effect is exactly the point. Egypt’s protests were originally inspired by demonstrations that brought down the Tunisian dictatorship, and similar protests have broken out in countries like Jordan, Yemen, and Saudi Arabia. It appears that Huckabee is above all else concerned with maintaining a status quo which serves the self-interest of countries like the United States and Israel in the short-term, but unjustly denies basic freedoms and rights to people over the long-term.